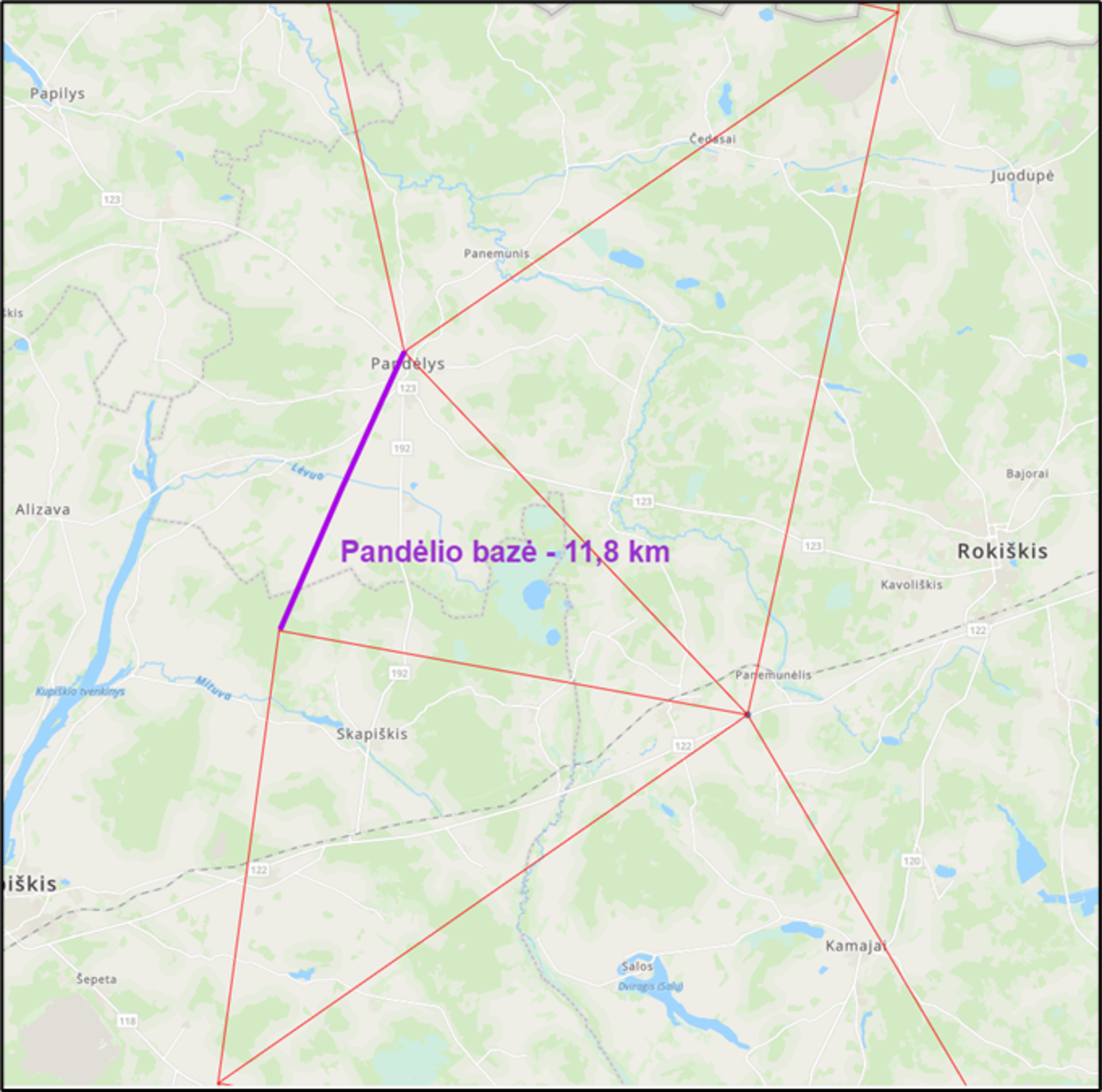 Baseline is a site of a triangle in a chain, in which the distance on the ground was measured as accurately as possible. Knowing the length of the baseline and inside angles, lengths of other sides of the triangle can be calculated according to the formulas of the sinus theorem, and the chain measurements could be continued. The only Pandėlys baseline was measured in the Lithuanian chain. It’s length - 11.8 km, the longest baseline of the Struve Geodetic Arc.

Special instruments have been used for precision distance measurements of the baselines. Metal rods were put together in a wooden rack, and the gaps between them were measured by a geodetic ruler with magnifier. The ruler’s divisions - 0.001-inch (0.025 mm). Temperature of the rods was monitored by built-in thermometers. The position of the rods was adjusted by levelling in 0,1 minute accuracy. For distance measurements F.G.V. Struve used the French benchmark “toise” (1,949 m), while C. Tenner - the Russian standard “sazhen” (2,134 m).

After measuring the gaps between the metal rods (2 toises length in the instrument of F.G.W. Struve and 2 sazhens length in the instrument of C. Tenner) several times, the pillars were moved to the direction of the measured line, and the rod was carried over, again accurately measuring the next gap between the rods. In such a manner the whole long baseline (2-11 km) was measured carrying on the knees, practically. An incredibly high relative accuracy of 1: 300,000 (3 mm deviation per kilometre) was achieved during the baseline measurements in the Struve Geodetic Arc.

Using different measurement standards: the length of your steps, toise, sazhen, measure the distance from the mark at this stand to the mark in the direction of the previously visited stand. Calculate the distance in meters. Please check your calculation results with the correct length on the other side of this stand.

Measure in feet the length of the bridge over the river in a curved convex line and a straight line. Calculate distances in meters. Compare both measurements and evaluate how the curvature influences the distance. You can check the accuracy of your measurements by finding the answers on the exposure. Using the formula R = S / pi, calculate a relative simplified Earth's radius if the length of the bridge is equal to the Earth's hemisphere (i. e. from equator to equator). Pi (π) is 3,1415. Compare the result with the true radius R of the Earth’s ellipsoid, which is 6,371 km.